Where Did It All Begin

This page is dedicated to the history of St James Anglican Church and associated buildings.

Welcome to the Church of St. James the Apostle located in the heart of Kemptville. St James is an active parish with roots going back to 1826. Although the Church is the community, rather than the stone and mortar, the fabric of the Church is important. It reminds us of the continuity of the membership, the legacy of previous communities, and the responsibility that we bear to hand down that legacy.

St. James started as a mission parish in the Rideau townships in 1826. It quickly evolved into an Anglican parish, first as a frame building in 1827 and then in the current structure in 1878. In 1837 Governor Colborne declared it a crown rectory, ensuring that it would take its place as a full-fledged Anglican church in perpetuity.

The Reverend John Stannage solicited the moneys required for constructing the church and equipping it. In addition to the Society for the Propagation of the Gospel and other benefactors in England, local residents contributed handsomely. Among the donated equipment from 1877 and still in use, are the large candlesticks on the altar – from St. Paul’s Cathedral, London – and the font urn, from St. Martin’s Canterbury – the oldest church in Kent, England.

The interior of the building is lath and plaster. Stencils in the ceiling of the nave represent the twelve apostles. One large stencil serves as the backdrop to the font. The alpha and omega stencils repeat the theme of the triptych window above the altar. During the repairs following the fire on October 31, 2002, several stencils in the chancel were beyond repair. Fortunately, the fire did not damage the blue limestone exterior walls. 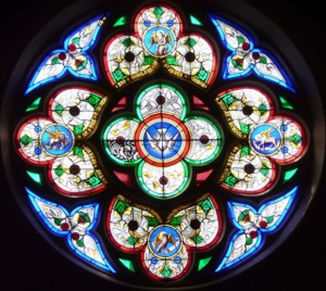 The stained-glass windows in the church are memorials to past members, early and late. They tell the history of the church. Each speaks of the mystery and joy of Christ and of our commissioning to be Christ’s ministers and disciples. The oldest is the Stannage triptych, a memorial to the rector who died in 1880. On the west wall is the rose window, which was a gift from the children and teachers of the Sunday School in 1882.

St. James Memorial is not a static building. Throughout the past 125 years the building has undergone many enhancements, some scheduled and some unscheduled as in the case of the  fire. In both cases, parishioners have donated all the equipment and through proper stewardship, the moneys for the repairs. From St. Luke’s chapel in 1959, the baptistery in 1962, the accessibility ramp in 1990, new exterior doors in 2000, and the granite sign on the front lawn in 2002, members of St. James have ensured that the church will meet the needs of parishioners in Kemptville for years to come.

The organ bought in 1929 has its own unique history. Anecdotal evidence describes a 1946 innovation of the late Gil Hopson, owner of Kemptville pharmacy and St. James parishioner: enema tubing to serve as pipes for the then pneumatic organ. Conversion of the organ to electro-pneumatic occurred in 1956, losing those tubes.

By 2002, however, the organ was badly in need of restorative work. The congregation agreed do this at the same time as the repairs to the church following the fire. Once again, a gift from a parishioner made this possible. During the re-voicing of the pipes, the organ gave up one of its secrets: a pipe bearing the stamp of the manufacturer of the original organ.

The tower bell from the 1826 church, though cracked since 1878, calls Anglicans to worship on Sundays, and tolls for members’ weddings and funerals.

Please remember that you are in a house of prayer. It is a house of prayer and a house filled with activity. We believe that we are called by God to serve Christ through both work and prayer. You stand in the midst of a community dedicated to God and to one another, in service and in fellowship in and through Jesus.

Incumbents of the Parish of St. James, Kemptville

Leslie Hall - End of an Era

End of an Era: 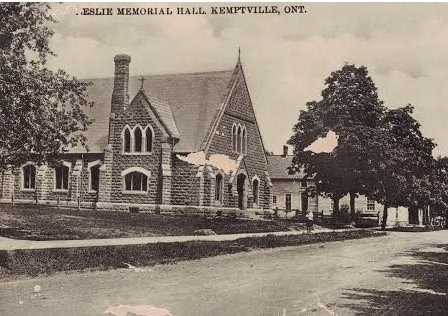 Submitted by Doug MacDonald on behalf of The Corporation of St. James Anglican Church.

After much deliberation and great sadness the parishioners of St. James have decided to close their Parish Hall. The hall is named for Robert Leslie (1803-1891) who was for over 50 years the Superintendent of St. James’ Sunday School.

Unlike St. James Memorial Church constructed with strong cut limestone some 28 years earlier, Leslie Hall was built not of stone, but of concrete blocks manufactured locally by The Dominion Concrete Company.

On October 8, 1907 the hall’s cornerstone was “well and truly laid”. Less than a year later the official opening of Leslie Hall was celebrated on Dominion Day July 1, 1908. Leslie Hall’s interior was finished with fine woodwork of polished oak. It was “to be used for Sunday School, church entertainment and business meetings”.

The long slow deterioration began with the fire of January 12, 1925. Although Leslie Hall was restored, the heat from the flames, water from the fire hoses and freezing January temperatures may have caused unseen damage to the concrete blocks.

In 2017, due to degradation, Leslie Hall is no longer sound. Water has infiltrated the basement walls. Climate has been an enemy to the exterior – rain has entered the hollow concrete blocks, sun, wind and the freeze/thaw of winter has further eroded the core blocks. Parts of the building have already been cordoned off and soon it will be dangerous to walk near the buttresses for fear of falling capstones and concrete.

Professional estimates indicate money required to address structural issues on the exterior alone approach one million dollars. These costs are prohibitive and the congregation anguished over the decision, but at the Annual Vestry on February 26th in a majority voted to close and decommission their Parish Hall.

Leslie Hall has been a valued resource for the church and for the community for 109 years. Everyone who has attended or held events in the hall have fond memories of concerts, plays, wedding receptions, teas, dinners, bazaars, Literary Follies, Friendship Lunches and the recent Community Christmas Dinner on December 25th. Surprisingly, many are unaware they were guests in the St. James Parish Hall.

As part of the Outreach Mission of St. James Anglican Church, the hall has been made available to groups at reduced fees and frequently to charitable groups free of charge. In recent years major groups have moved to newer venues. The fees received from those using Leslie Hall no longer cover the cost of keeping it open. Each week a portion of the offering placed in the collection plates is used to service Leslie Hall.

Fr. Robert Porter recently stated, “We know our church hall has been a blessing to our community, to the many groups that have used the hall over the years, and to our church. However, we recognize it is time to give thanks for the past and move into the future God has for us.”

A service of thanksgiving and decommissioning will be held on Sunday, June 4th, 2017,  The people of North Grenville are invited to attend. 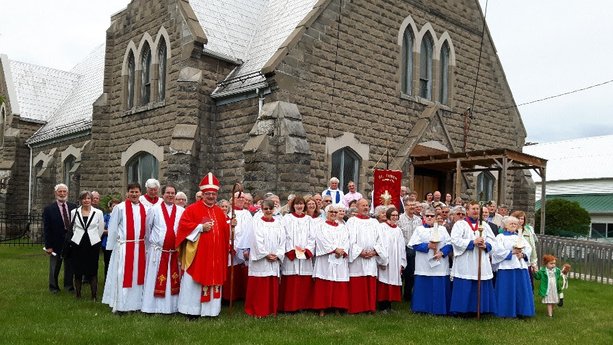